1) Which among the following is ranking first in global milk production?

Answer: a
• In the last three decades, world milk production has increased by more than 58 percent, from 522 million tonnes in 1987 to 828 million tonnes in 2017. India is the world’s largest milk producer, with 21 percent of global production, followed by the United States of America, China, Pakistan and Brazil.

2) NASA plans to launch an unmanned nuclear-powered drone, Dragonfly. It is to study about

Answer: b
• NASA announced a $1 billion mission to send an unmanned drone to Titan, Saturn’s largest moon. For this mission, NASA created Dragonfly, a nuclear-powered drone the size of a lawn-mower. It will explore Titan’s surface and search for potential life.
• Titan resembles a young Earth and contains a thick atmosphere, lakes and rivers on its surface, and an underground ocean of water.

3) Basel Committee on Banking Supervision (BCBS) is the primary global standard setter for the prudential regulation of banks. Where is the city located?

a) Germany
b) Austria
c) Switzerland
d) None of the above

Answer: c
• Basel is a city in Switzerland which is also the headquarters of Bureau of International Settlement (BIS).

4) Which of the following genetically modified crops are not banned in India?

Answer: a
• Herbicide-tolerant Bt (HT Bt) Cotton is genetically modified crop of unapproved genes which is not permissible in India. Technically, herbicide is like a poison which is used to destroy unwanted vegetation. The technique in the HT Bt Cotton makes the crop resistant to herbicide following modification in genes of the seeds.

5) Which among the following states doesn’t have any known Uranium reserves? 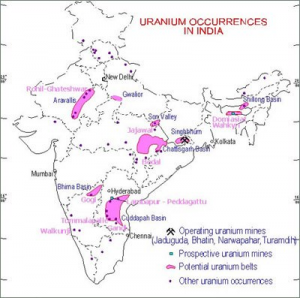