Answer: c
• Pakistan will allow Afghanistan to send goods to India using the Wagah border from July 15. The decision is part of Islamabad’s commitment under Pakistan-Afghanistan Transit Trade Agreement.However, Islamabad is silent about allowing the same facility to India for exports to Afghanistan.

2) Chabahar Port, often seen in news, is geographically closer to

Answer: a
• It is located on the Gulf of Oman and the only oceanic port of Iran.

3) Which among the following is located to the northern most?

Answer: b
• India and China are scheduled to hold the fourth round of Corps Commanders talks at Chushul.
• 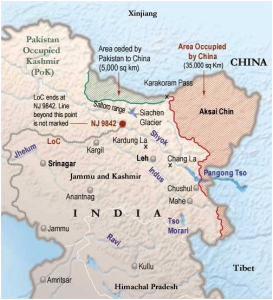 4) 13th July 2020 marks the 206th Birth Anniversary of Bhanubhakta Acharya. He translated the Great Epic of Ancient India- Ramayana from Sanskrit to

Answer: c
• Bhanubhakta Acharya was the first writer to translate the Great Epic of Ancient India- Ramayana from Sanskrit to Nepali. He was born in Nepal.

Answer: a
• VNR is a process through which countries assess and present progress made in achieving the global goals.
• The reviews are purely voluntary and state-led.
• NITI Aayog presents India’s second Voluntary National Review at UN’s High-Level Political Forum.